Marching band and school orchestras are often the first place where budding trumpeters, trombonists, tuba and French Horn players get their start. From there, players can march down a wide variety of avenues, from Broadway orchestras in New York City to New Orleans brass bands marching down the streets of the French Quarter.

Punk rock, Jazz and let’s not forget Fleetwood Mac’s Tusk, have all benefited from a vibrant horn section.

Bring your horn and West Side Music Academy will match you with a teacher and a program to make your music shine. 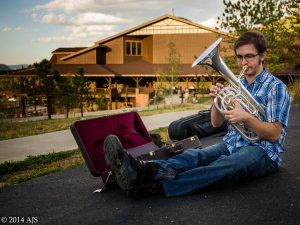 David Dimmit is a euphonium player and teacher from West Seattle. He received a master’s degree from the University of Missouri-Kansas City and and a bachelor’s degree from Truman State University. He is currently pursuing a DMA from UMKC. His principal teachers have been Thomas Stein and Steven Seward.

David is proud to be a member of the internationally-acclaimed Fountain City Brass Band where he can usually be found playing second baritone. With FCBB, he has competed and performed across the United States, as well as in England, France, and Belgium.

Along with his performing experience, David loves sharing his expertise with his students, having maintained a thriving private studio and being a tutor and conductor with the Fountain City Youth Brass Academy.

When he is not teaching, performing, or practicing, David is often cooking or playing electric bass or guitar.

• Our 2022 Summer Camp schedule is available.  Please email us for more info or to sign up!

• WSMA has teamed up with Metropolitan Music for rentals. Fill out the rental form here and pick up your instrument in West Seattle.